When the Russian young Malware coder is praised by the Russian head of Information Department of the Ministry of Education and Science of North Ossetia. Under the spotlight: the story of Atsamaz Gatsoev (aka “1ms0rry”) who has set up his illegal business.

A new write-up made by a security researcher known as Benkow (@Benkow_) has been published, as ever on Sunday, and to be more precise on Sunday 8 April.

It’s about the story of a malware coder from Russia who is developing and selling two kinds of malware (a password stealer and a miner) with a lot of features and a variegated commercial offer: this malware actor is targeting also Russian people with his malware but Mr. Freud would absolve him (form the psychological point of view) analysing his nickname. The nickname, in fact, is “Im Sorry” (1ms0rry) which maybe talks about his interior drama: nevertheless, looking at what he does in his life the drama and the sorrow are for the thousands of victims he makes cry with his work.

The incredible side of this story is that the man has declared to not be worried to be recognized with his real name after Benkow crew has unmasked the real identity of this young criminal with a great page of investigative journalism.

But let’s go with order.

First of all we have to say that this time the post is written in cooperation with some Benkow’s (and this post author Odisseus) friends and the list of them is reported below in the same order can be found on the Benkow_ post: they are “.sS.!, coldshell, fumik0_, siri_urz, VxVault, Cybercrime-Tracker, MalwareMustDie, .sS.! (again)”.

Yes, at the beginning of the post there is this image showing there are no doubts that #MalwareMustDie team has also given a contribution in this post: interviewed by the author of this post, Odisseus, mr. @unixfreaxjp said that, of course, we have to expect more to come about malware and reversing from the #MMD team in the future.

Going back to the post published by Benkow, we have a very interesting work about the malware analysis referring the features spotted in the wild of a password Stealer malware made by “1ms0rry”: everything starts from a post published on a Russian hacker forum at the URL of the ifud.ws site the 7th of September 2017. There, a Russian hacker called “1ms0rry” – on Twitter (@ims0rry_off) – has published a post about a “Stealer N0F1L3 + admin panel ims0rry” with many different features. But let’s give a look at the malware capabilities.

Giving a closer look to his advertising page on the hack forum page as is possible to read in English – translated by Russian thanks to Google – the following detailed features of the malware are offered: the “Starter Stealer” is written in C# and is able to steal passwords from 7 internet browsers: the price is 20$ for the build version and 600$ for the source code. 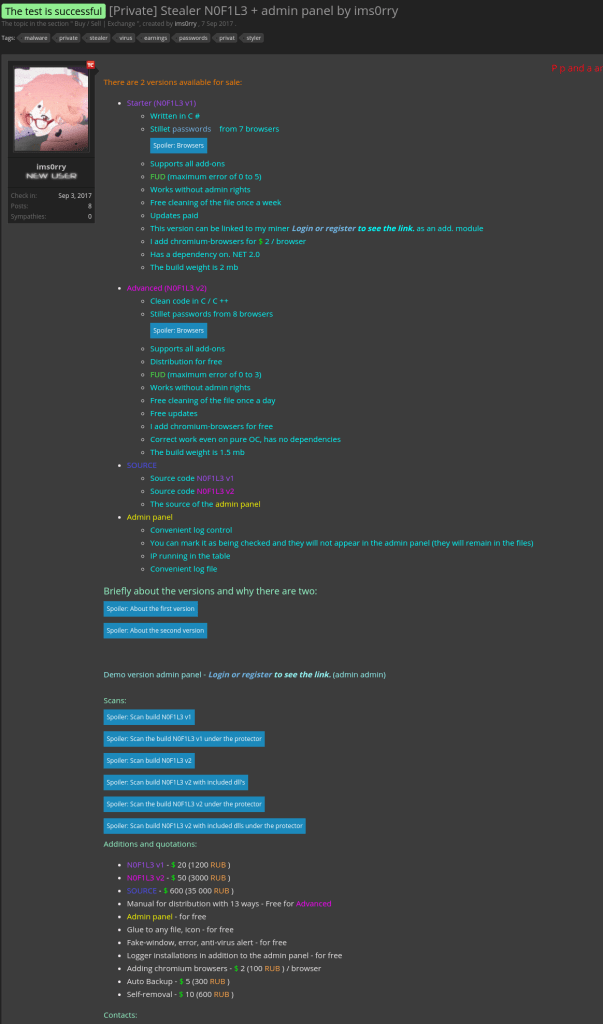 But this is not all, the malware is able to do more:

The password stealer malware has also the following features:

The Benkow post reports that what is interesting how 1ms0rry stealer is able to attack also Russian browsers like Yandex.

As is possible to see in the C&C logs provided by the Benkow post, many IP addresses are related to the Russian Federation: 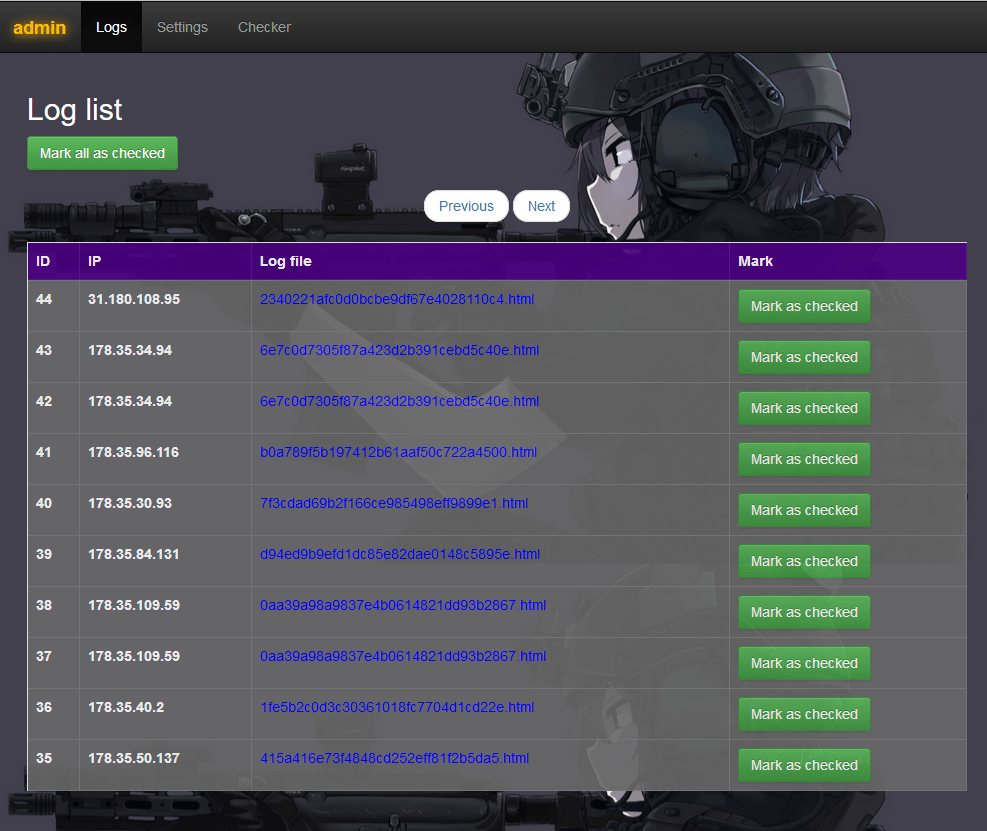 Regarding the C&C panels, they have some the vulnerabilities: it can be easy to change the password, Benkow reports how to, providing even detailed list of IOCs and Yara for the malware admin panel.

The advanced version is written in C – C++ and now is able to steal password also from Firefox.

The second malware is a made by a loader and a miner: the LoaderBot is developed in .NET and as Benkow says it reuses a lot of code by N0F1L3.

The LoaderBot it is a process that kills itself in the Task Manager then is not visible and install itself in the following PATH: C:users%userprofile%AppDataRoamingWindows

The persistence of the LoaderBot is achieved by installing the adding an item in the Windows Registry hive called at the startup: HKCUSOFTWAREMicrosoftWindowsCurrentVersionRun

This means that first the infection is carried on by the Loader then the attacker installs the Miner.

The Miner is developer in C++, is able to hide itself, to detect a Wallet address in the clipboard and replace it: it runs RunPe using a known process hollowing procedure and the following System API CreateProcessA(Suspended)/SetThreadContext/WriteProcessMemoryResumeThread/ and the code is a copy paste from GitHub

For the details of C&C, vulnerabilities and attack vector they are widely provided in the Benkow research.

What is interesting now is how has been correlated with the “1ms0rry” nickname with a very promising Russian student named Ацамаз Гацоев or Atsamaz Gatsoev.

The core of the story: 1ms0rry identity has been unmasked

First of all the Russian guy has a Twitter account that is “Im Sorry” with the following URL: https://twitter.com/ims0rry_off. The account is still working at the moment, and the malware actor is answering till 17 hours ago at the moment we are writing.

“Im Sorry” answered to the tweet where Benkow launched his post about him telling to be happy to have people talking about his work, because he doesn’t hide his identity, on the contrary, he is happy that his crimes are associated to him. 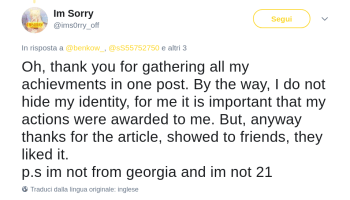 That probably explains why as a malware actor he didn’t try to hide himself arriving to answer to another security researcher who was highlighting the IP address of one of his C&C panel: 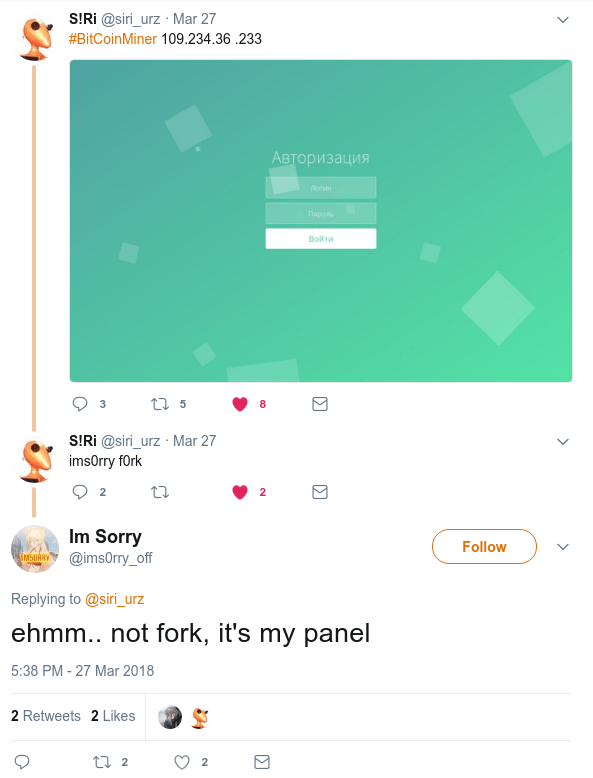 At the beginning point, looking for “Im Sorry” have been found some accounts on different platforms: he has an account on Telegram, on GitHub and different mail addresses like:

with the following nicknames:

Then looking for lordatsa@mail.ru Benkow has found a mail.ru account at the following URL https://my.mail.ru/mail/lordatsa/photo that give us a first name and a second name: Аца Гацоев (Atsa Gatsoev) enabling to find something more, for instance the information contained in this Weblancer  profile: https://www.weblancer.net/users/hypega/ 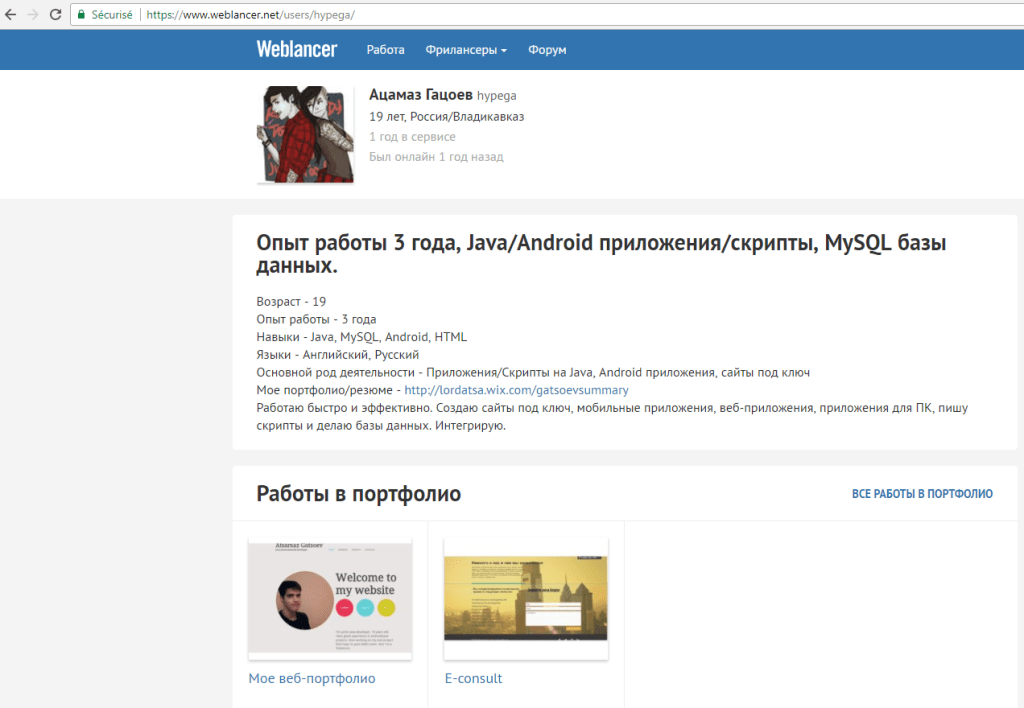 Then the user is “gorno” as is possible to see in the video at second 6 that there is Thermida and a local path, again “gorno” C:UsersgornoDesktopwinhost.exe 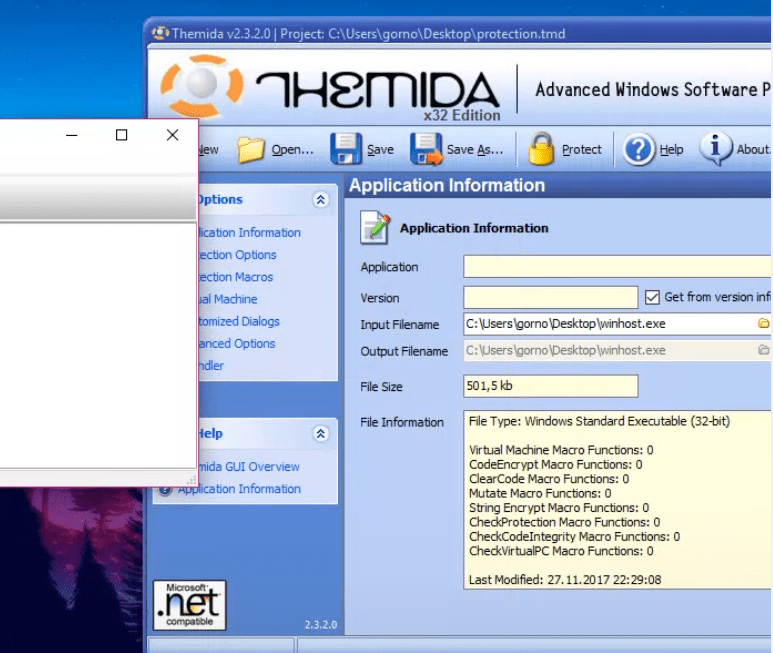 And again in another video it is possible to see “the viruscheckmate user” that is again “hypega”.

The name “hypega” give the opportunity to retrieve another 2 very interesting links:

What is probably confusing, looking at his photographs, is that he has the “face” of the good boy: and this is confirmed from a very recent and amazing post by Alan Salbiev in the 2013 known as “head of the Information Department of the Ministry of Education and Science of North Ossetia” and from 2017 is at “Management of North Ossetia-Alania in information technologies and communications Local business Vladikavkaz, Russia”

The 20th of March he writes the following Facebook post talking about “1ms0rry” as one who has done a great job in his office and more over he says that on “February 25, 2018 at competitions on sports hacking at the University ITMO our hero confidently walked rivals from Komsomolsk-on-Amur,  Khanty-Mansiysk, Penza, Pyatigorsk, etc. As a result, a schoolboy from Vladikavkaz entered the top 15 in St. Petersburg.

At Atsamaz there is a dream – to enter the University of ITMO. Our Office will provide every possible assistance to a talented guy”. 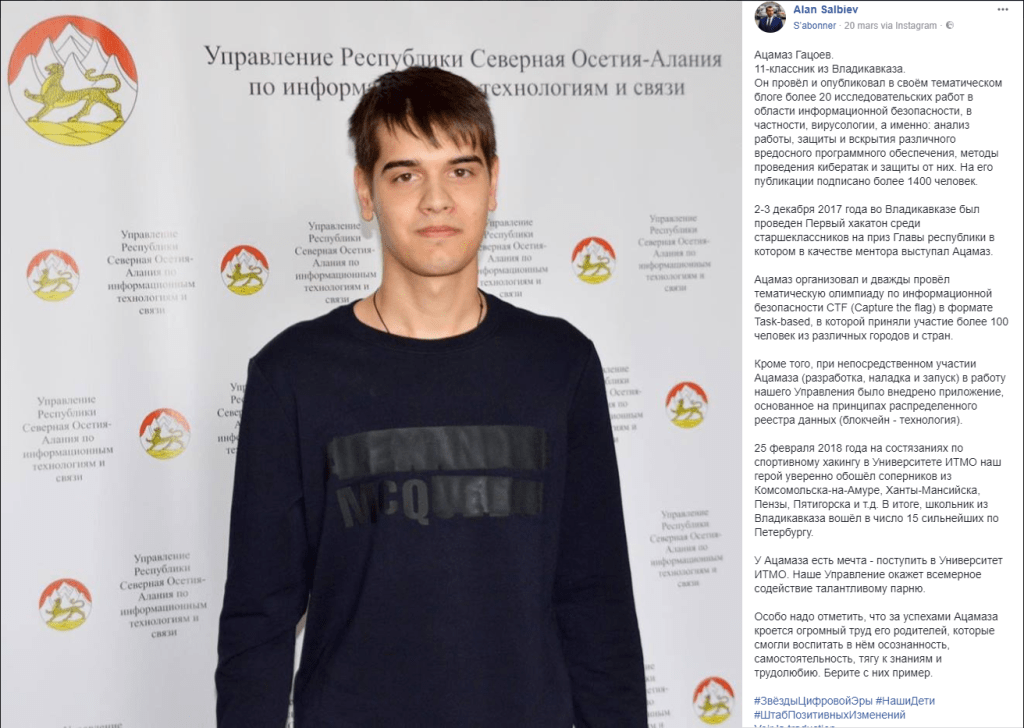 We don’t know how much Mr.  Alan Salbiev knows about his “dream” if he knows if he is a criminal or if he thinks that as a CTF hacker he has to get his Gym to become a perfect champion in Russia hacking and illegally stealing password or cryptocurrency to people in Russian and around the world.

For sure Europol or FBI now are hoping he is going to participate soon in competitions on sports hacking or some CTF competitions in Europe or USA.

The post When the Russian Malware coder Gatsoev is praised by the Russian head of Information Department of the Ministry of Education and Science of North Ossetia appeared first on Security Affairs.