Researchers at MalwareHunterTeam have discovered a new strain of ransomware called RansSIRIA that encrypts victim’s files and then states it will donate the ransom to Syrian refugees.

Unscrupulous cybercriminals try to exploit every situation, even the most dramatic incidents. In the past, crooks attempted to exploits the media attention on dramatic events such as the Boston Marathon, the MH17, and the Hurricane Matthew Marathon.

Now security experts at MalwareHunterTeam have discovered a new strain of ransomware called RansSIRIA that encrypts victim’s files and then states it will donate the ransom to Syrian refugees.

According to the experts, the RansSIRIA ransomware is a variant of the WannaPeace ransomware the campaign spotted by the researchers aimed at Brazilian users.

Once the ransomware is executed, it will display a fake Word window while the malware encrypts victim’s files.

When the encryption process is completed, the ransomware will display a ransomware note containing the instructions for the payment. 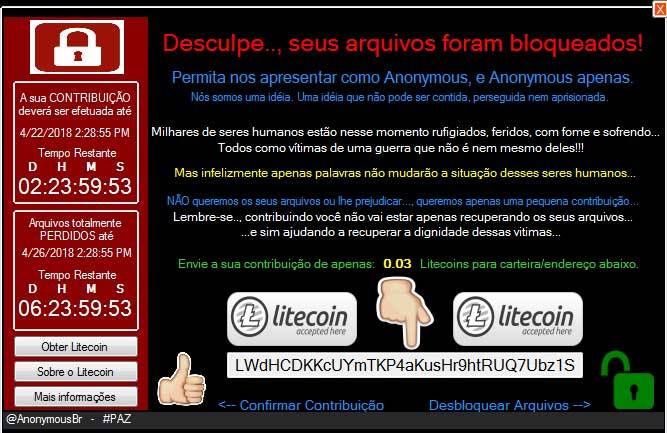 The ransom note also contains a singular message to explain the ransom will be used to help Syrian refugees.

The ransom note is written in Portuguese, below the translated text was published by experts at BleepingComputer:

The ransomware will show a gallery of cruel images that show the dramatic situation in Syria and will play a YouTube video of the “Save the Children” organization that shows the suffering of Syrian children and the effect of a stupid war that someone don’t want to stop.

If the victims chose to pay the ransom, the malware will decrypt the files and then open the short URL https://goo.gl/qNxDFP, that is the Google-translated version of the article published at Worldvision about Syrian refugee children.

Statistics on the short URL shows the RansSIRIA ransomware was created on March 15th and at the time of writing it was opened 64 times, a circumstance that suggests that the threat is currently not widespread.

Unfortunately, ransom paid by the victims will never support the Syrian refugees.

“The ransomware developers, though, are not donating the ransom payments to the Syrian people and are only trying to benefit from others pain and suffering, which makes it that much worse.” explained Lawrence Abrams from Bleeping Computer.