Twitter announced it has shut down 360,000 terrorist-related accounts since last year, Daesh traffic on its platform has plummeted by 45 percent in 2 years.

Social media platforms are privileged instruments for the ISIS propaganda, members of the terror organization make a large use of social media like Twitter to share images and news about thier
In response, the IT firms are identifying and closing the accounts used by terrorists. Twitter is one of the most active in this sense, this week it announced a drastic escalation in the suspension of accounts that shares content related the radical group.

Twitter continues to close hundreds of thousands of accounts for violating the company’s policies on violent extremism. The news was confirmed in a blog post published by the company.

“Earlier this year, we announced we had suspended more than 125,000 accounts since mid-2015 for violating our longtime prohibition on violent threats and the promotion of terrorism and shared the steps we are taking as a company to combat this content.” states the post.

Since mid-2015, we have suspended over 125,000 accounts for threatening or promoting terrorist acts. Read more here: https://t.co/FQJeOTtPLz

The numbers provided by Twitter are eloquent, the company has shuttered 235,000 accounts since February and the daily suspension rate is raised by 80% since last year.

“While our work is not done, today we are announcing that we have suspended an additional 235,000 accounts for violating our policies related to promotion of terrorism in the six months since our February 2016 post.” 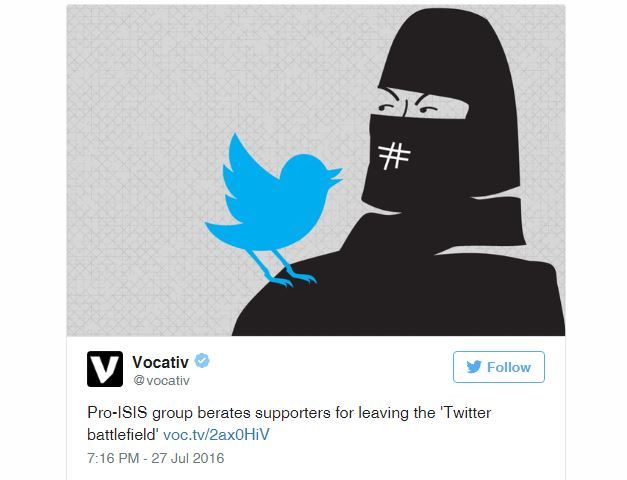 The number of suspensions has reached 360,000 since the middle of 2015, the experts noticed a significant shift in propaganda activities off of Twitter.

Of course, the actions taken by the company are having an effect also on the number of followers that is rapidly decreasing.

Twitter was in the middle of a heated debate about its real effort against the IS propaganda.

Twitter is among the social media companies have been hit by civil lawsuits from relatives of ISIS victims that accuse them of facilitating propaganda and terrorism activities online.

Security experts were skeptical of the company accused of doing too little against the activities of the ISIS members on its platform.

In 2015, the director of the FBI accused Twitter of helping the ISIS by serving as a “devil on their shoulder” of its followers.

“ISIL is reaching out, primarily through Twitter, to about 21,000 English-language followers,” FBI director Comey told the Senate Judiciary Committee. “It buzzes in their pocket … a device, almost a devil on their shoulder, all day long saying, ‘Kill, kill, kill, kill.’”

Despite Twitter is increasing its censorship of terror content online it faces technological limits for automatic detection of this kind of messages online.

“As we mentioned in February, and other companies and experts have also noted, there is no one “magic algorithm” for identifying terrorist content on the Internet. But we continue to utilize other forms of technology, like proprietary spam-fighting tools, to supplement reports from our users and help identify repeat account abuse. In fact, over the past six months these tools have helped us to automatically identify more than one third of the accounts we ultimately suspended for promoting terrorism.” states the blog post published by the company. “We will continue to invest in both technology and other resources in the future and you can expect us to update our progress regularly as part of our Transparency Report beginning in 2017.”