Security experts from Fortinet have spotted a new variant of the Mirai botnet dubbed ‘Wicked Mirai’, it includes new exploits and spread a new bot.

The name Wicked Mirai comes from the strings in the code, the experts discovered that this new variant includes at least three new exploits compared to the original one.

“The FortiGuard Labs team has seen an increasing number of Mirai variants, thanks to the source code being made public two years ago.” reads the analysis published by Fortinet.

“Some made significant modifications, such as adding the capability to turn infected devices into swarms of malware proxies and cryptominers. Others integrated Mirai code with multiple exploits targeting both known and unknown vulnerabilities, similar to a new variant recently discovered by FortiGuard Labs, which we now call WICKED.”

The Mirai botnet was first spotted in 2016 by the experts at MalwareMustDie, at the time it was used to power massive DDoS attacks in the wild. The Mirai’s source code was leaked online in October 2016, since then many other variants emerged in the wild, including Satori, Masuta, and Okiru.

According to Fortinet, the author of the Wicked Mirai is the same as the other variants.

Mirai botnets are usually composed of three main modules: Attack, Killer, and Scanner. Fortinet focused its analysis on the Scanner module that is responsible for the propagation of the malware.

The Wicked Mirai would scan ports 8080, 8443, 80, and 81 by initiating a raw socket SYN connection to IoT devices. Once it has established a connection, the bot will attempt to exploit the device and download its payload by writing the exploit strings to the socket through the write() syscall.

The experts discovered that the exploit to be used depends on the specific port the bot was able to connect to. Below the list of devices targeted by the Wicked Mirai

The analysis of the code revealed the presence of the string SoraLOADER, which suggested it might attempt to distribute the Sora botnet. Further investigation allowed the researchers to contradict this hypothesis and confirmed the bot would actually connect to a malicious domain to download the Owari Mirai bot.

“After a successful exploit, this bot then downloads its payload from a malicious web site, in this case, hxxp://185[.]246[.]152[.]173/exploit/owari.{extension}. This makes it obvious that it aims to download the Owari bot, another Mirai variant, instead of the previously hinted at Sora bot.” reads the analysis.

“However, at the time of analysis, the Owari bot samples could no longer be found in the website directory. In another turn of events, it turns out that they have been replaced by the samples shown below, which were later found to be the Omni bot.”

The analysis of the website’s /bins directory revealed other Omni samples, which were apparently delivered using the GPON vulnerability CVE-2018-10561. 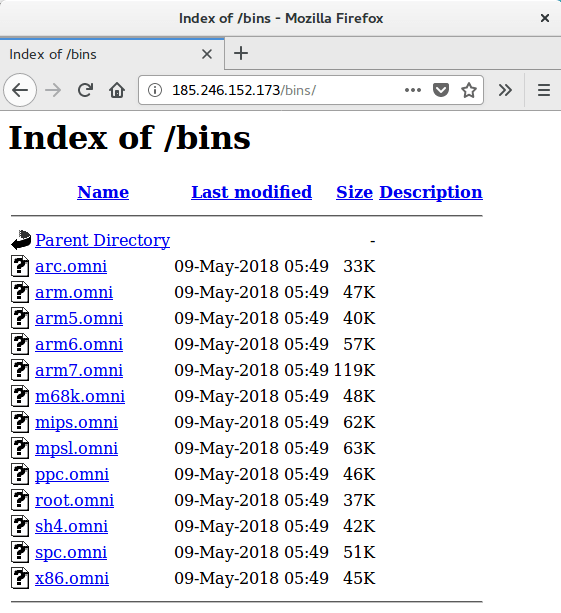 Searching for a link between Wicked, Sora, Owari, and Omni, the security researchers at Fortinet found a conversation with Owari/Sora IoT Botnet author dated back to April.

The vxer, who goes by the online handle of “Wicked,” that at the time said he abandoned the Sora botnet and was working on Owari one.

The conversation suggests the author abandoned both Sora and Owari bots and he is currently working on the Omni project.

“Based on the author’s statements in the above-mentioned interview as to the different botnets being hosted in the same host, we can essentially confirm that the author of the botnets Wicked, Sora, Owari, and Omni are one and the same. This also leads us to the conclusion that while the WICKED bot was originally meant to deliver the Sora botnet, it was later repurposed to serve the author’s succeeding projects,” Fortinet concludes.