According to a new study conducted by American and Czech researchers, the trade of code-signing certificates is a flourishing business.

Code-signing certificates are precious commodities in the dark web, according to a new study conducted by American and Czech researchers and Symantec Labs technical director Christopher Gates their trade is a flourishing business.

The experts pointed out that the demand for code-signing certificates is increased because vxers have started using them to bypass security solutions such as Microsoft’s Windows Defender SmartScreen.

“While prior studies have reported the use of code-signing certificates that had been compromised or obtained directly from legitimate Certification Authorities, we observe that, in 2017, these methods have become secondary to purchasing certificates from underground vendors.” states the research paper published by the experts.

“We also find that the need to bypass platform protections such as Microsoft Defender SmartScreen plays a growing role in driving the demand for  Authenticode certificates. Together, these findings suggest that the trade in certificates issued for abuse represents an emerging segment of the underground economy.”

The experts conducted an in-depth analysis of this underground trade, considering vendors, malware developers, and certificate issuers, focusing their investigation on the vendor’s market share and the factors that most of all drive the demand in the market. The experts inspected 28 forums, 6 link directory websites, 4 general marketplaces
and dozens of websites treating black market goods.

Microsoft Defender SmartScreen is a reputation-based system, every time encounters a certificate for the first time, it will raise a warning the user has to click-through during installation.

To avoid warning being displayed the attackers need a positive reputation for the certificate, this could be obtained by first using it to sign benign programs and installing them on many client machines.

“This high price is probably due to the extensive vetting process and the fact that the 2FA hardware token needs to be send by post to the customer that buys the EV certificate.”

The researchers also analyzed the publishers noted in the certificates using the beta version of the British public register of companies and the result was suspicious.

The doubt is that some companies were set up specifically for certificate abuse.

“All of the publishers were rather young companies, some of them being incorporated around a month before their code-signing certificate was issued and most of those did not have software development as their primary focus.” continues the paper.

Researchers noticed that most of the activity was originated in Russia. 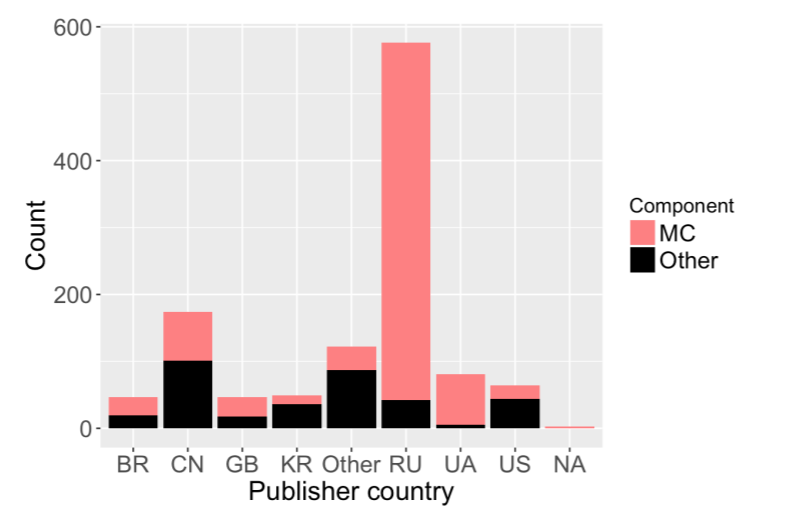 Certificate Authorities have to vet applicants with care and once a malicious publisher is identified all certificates from that publisher should be revoked.

The post Study confirms the trade of code-signing certificates is a flourishing business appeared first on Security Affairs.