Cisco Talos researchers have spotted a new variant of Telegrab malware designed to collect information from the Desktop version of the popular messaging service Telegram.

Security experts from Cisco Talos group have spotted a new strain of malware that is targeting the desktop version of end-to-end encrypted instant messaging service Telegram.

We all know that Telegram is under attack by Russia’s Media watchdog Roskomnadzor that asked the company to share technical details to access electronic messages shared through the instant messaging app. Last month, the Russian authorities blocked the Telegram app in the country because the company refused to hand over encryption keys of its users to Federal Security Service (FSB) of Russia for investigation purposes.

The malicious code is a variant of the Telegrab malware that was first spotted in the wild on 4 April 2018, it has been designed to harvest cache and key files from Telegram application.

A  second variant of the Telegrab malware emerged on 10 April 2018, the development team appears very active.

While the first variant of the Telegrab malware only stole text files, browser credentials, and cookies, the second version also implements the ability to collect data from Telegram’s desktop cache and Steam login credentials to hijack active Telegram sessions.

“Over the past month and a half, Talos has seen the emergence of a malware that collects cache and key files from end-to-end encrypted instant messaging service Telegram. This malware was first seen on April 4, 2018, with a second variant emerging on April 10.” reads the blog post published by Cisco Talos.

The researchers identified the author behind this malware with high confidence, he posted several YouTube videos tutorial for the Telegrab malware.
The operators of this malware use several pcloud.com hardcoded accounts to store the exfiltrated data, the experts noticed that stolen info is not encrypted allowing anyone with access to these account credentials to access the exfiltrated data.

“Telegram session hijacking is the most interesting feature of this malware, even with limitations this attack does allow the session hijacking and with it, the victims’ contacts and previous chats are compromised,” says the Talos team.

The malicious code searches the hard drives on Windows targets for Chrome credentials, session cookies, and text files, which get zipped and uploaded to pcloud.com.

Cisco Talos researchers blame “weak default settings” on the Telegram Desktop version, the Telegrab malware, in fact, abuses the lack of Secret Chats that are not implemented on the desktop version of the popular application.

Cisco Talos experts explained that the Telegrab malware works “by restoring cache and map files into an existing Telegram desktop installation if the session was open.

“In summary, by restoring cache and map files into an existing Telegram desktop installation, if the session was open. It will be possible to access the victim’s session, contacts and previous chats.” continues the post. 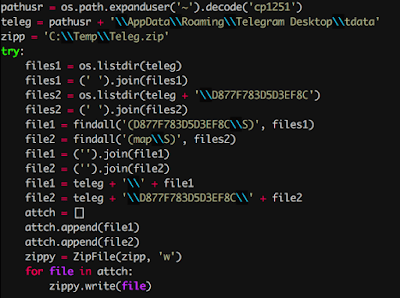 The analysis of the malware allowed the researchers to link it to a user that goes online by the name of Racoon Hacker, also known as Eyenot (Енот / Enot) and Racoon Pogoromist (sic).

The Telegram malware aimed at a surgical operation that can fly under the radar and compromise thousands of credentials in a few time.

Such kind of operations is usually not associated with cybercrime gangs that operate on a larger scale. Stolen credentials and cookies allow the malware operator to access the victim’s information on social media and email services (i.e. vk.com, yandex.com, gmail.com, google.com etc.) that are precious source of information for intelligence gathering.

“This malware should be considered a wakeup call to encrypted messaging systems users. Features which are not clearly explained and bad defaults can put in jeopardy their privacy.” concludes Talos experts.

“When compared with the large bot networks used by large criminal enterprises, this threat can be considered almost insignificant.”

“The malware samples analysed are not particularly sophisticated but they are efficient. There are no persistence mechanisms, meaning victims execute the malware every time, but not after reboots”.