The Nigelthorn malware has already infected over 100,000 systems in 100 countries by abusing a Google Chrome extension called Nigelify.

A new strain of malware, dubbed Nigelthorn malware because it abuses a Google Chrome extension called Nigelify, has already infected over 100,000 systems in 100 countries, most of them in the Philippines, Venezuela, and Ecuador (Over 75%).

The new malware family is capable of credential theft, cryptomining, click fraud, and other malicious activities.

According to the experts, the threat actor behind this campaign has been active since at least March 2018.

The Nigelthorn malware is spreading through links on Facebook, victims are redirected to a fake YouTube page that asks them to download and install a Chrome extension to play the video. Once the victims accepted the installation, the malicious extension will be added to their browser.

“Radware has dubbed the malware “Nigelthorn” since the original Nigelify application replaces pictures to “Nigel Thornberry” and is responsible for a large portion of the observed infections.” reads the analysis published by Radware.

“The malware redirects victims to a fake YouTube page and asks the user to install a Chrome extension to play the video.” 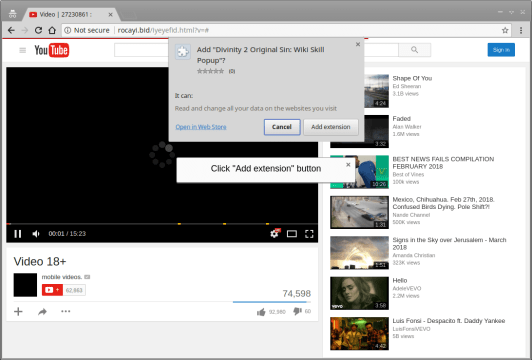 The malware was specifically developed to target both Windows and Linux machines using the Chrome browser.

When a victim clicks on “Add Extension” is redirected to a Bitly URL from which they will be redirected to Facebook in the attempt to provide the credentials for his account.

In order to bypass Google Application validation tools, the threat actors used copycat versions of legitimate extensions and injected a short, obfuscated malicious script into them.

“To date, Radware’s research group has observed seven of these malicious extensions, of which it appears four have been identified and blocked by Google’s security algorithms. Nigelify and PwnerLike remain active,” reads the analysis.

After the malicious extension is installed, a JavaScript is executed to start the attack by downloading the malware configuration from the command and control (C&C) server, after which a set of requests is deployed.

The malware propagated by using the stolen credentials, it sends the malicious link to the victim’s network either via messages in Facebook Messenger, or via a new post that includes tags for up to 50 contacts.

The Nigelthorn malware also downloads a cryptomining tool to the victim’s computer.

“The attackers are using a publicly available browser-mining tool to get the infected machines to start mining cryptocurrencies.” states Radware. “The JavaScript code is downloaded from external sites that the group controls and contains the mining pool. Radware observed that in the last several days the group was trying to mine three different coins (Monero, Bytecoin and Electroneum) that are all based on the “CryptoNight” algorithm that allows mining via any CPU.”

The malicious code uses numerous techniques to gain persistence on the infected system, such as closing the extensions tab if the user attempts to access it, or downloading URI Regex from the C&C and blocking users from accessing Facebook and Chrome cleanup tools or from making edits, deleting posts, and posting comments.

“As this malware spreads, the group will continue to try to identify new ways to utilize the stolen assets. Such groups continuously create new malware and mutations to bypass security controls. Radware recommends individuals and organizations update their current password and only download applications from trusted sources,” concludes Radware.