The Microsoft network engineer Raymond Uadiale (41)  is facing federal charges in Florida for the alleged involvement in Reveton Ransomware case.

The man is suspected to have had a role in helping launder money obtained from victims of the Reventon ransomware.

Uadiale currently works at Microsoft site in Seattle since 2014, according to Florida police between October 2012 and March 2013 he operated online with a UK citizen that used the moniker K!NG.

K!NG was responsible for Reveton ransomware distribution meanwhile Uadiale is accused to have managed the victims’ payments and shared them with K!NG.

“The judge did a double take when he heard that Uadiale has been working for Microsoft in the Seattle area since 2014.” reported the SunSentinel.

“Cybersecurity, don’t tell me?” U.S. Magistrate Judge Barry Seltzer quipped. “Are they aware of the charges?”

Assistant U.S. Attorney Jared Strauss confirmed in court that Uadiale involvement in Reveton campaign occurred before he was hired by Microsoft and prosecutors don’t have any evidence that he had any involvement in actually spreading the malware.

“Reveton is described as drive-by malware because unlike many viruses—which activate when users open a file or attachment—this one can install itself when users simply click on a compromised website. Once infected, the victim’s computer immediately locks, and the monitor displays a screen stating there has been a violation of federal law.” reads an alert published by the FBI in 2012. 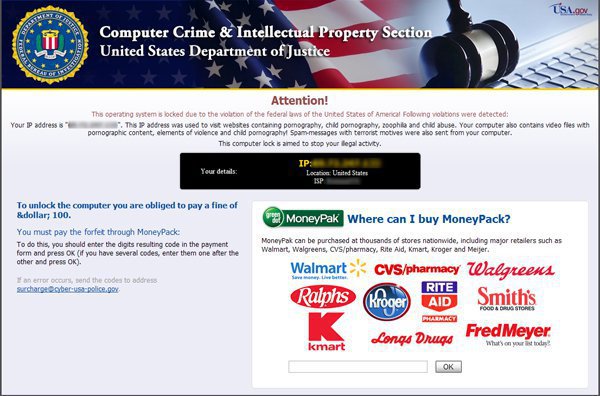 The Reveton ransomware locks the screen on the infected devices and requests victims to buy GreenDot MoneyPak vouchers and insert their code into the Reveton screen locker to unlock them.

The locked screen would display a fake message purportedly from the FBI or other law enforcement agency would claim the user had violated federal law.

While K!NG was accumulating victims’ payments on GreenDot MoneyPak prepaid cards, Uadiale was transferring them to the man in the UK via the Liberty Reserve virtual currency. The Liberty Reserve was shut down in 2013 and its founder Arthur Budovsky was sentenced to 20 years in jail for committing money laundering.

Court documents confirmed that Uadiale transferred more than $130,000 to K!NG.

Uadiale, is currently free on $100,000 bond and must wear an electronic monitor, he risks a maximum sentence of up to 20 years in prison, a fine of up to $500,000, and up to three years of supervised release.