Google announced that iOS users can now benefit from Google prompt feature via their Gmail application. Security and usability are crucial requirements for Google.

“In 2017, we made Google prompt the primary choice for G Suite users turning on two-step verification for the first time. Back then, we noted that users with iOS devices would need to install the Google app in order to use the feature.” reads the blog post published by Google.

“Today, we’re making it possible for users with iOS devices to receive prompts via their Gmail app as well. This should encourage more people to use Google prompt, which is an easier and more secure method of authenticating an account,” 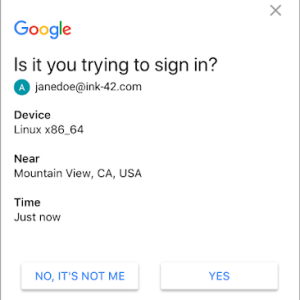 Google prompt was designed to inform users of any attempt to log into their accounts and confirm it with a tap on their mobile devices.

Gmail users can approve sign-in requests via 2-Step Verification (2SV) by simply taping a “Yes” button on their smartphone since June 2016.

The 2-Step Verification process leverages login authentication code sent via SMS, once the user has received it, he will need to enter it on a sign in page.

The tech giant has launched the Google prompt to make this process simpler, it displays a popup message on the user’s mobile devices asking them to confirm the login with a single tap.

Google prompt was rolled out to both Android and iOS devices, but on iOS, the users need to have the Google Search app installed.

In October 2017,  Big G introduced Google prompt in the G Suite. The company implemented the feature to all of its users who choose to enable the extra layer of security, but in order to use it, iOS users need to have the Google app installed on the device.

Now Google has overwhelmed this limitation and iOS users can benefit from the Google prompt without having Google app installed.

iOS users who have both the Google app and Gmail app installed on their devices will receive the prompts from Gmail.

The availability of Google prompt in Gmail for iOS will be available to all users in a few days.

The post iOS users can now use Google prompt on their devices via the Gmail app appeared first on Security Affairs.