Facebook has fixed a couple of vulnerabilities that could have been exploited by attackers to hijack accounts by abusing integration with the Oculus virtual reality headset.

In March 2014, Facebook founder Mark Zuckerberg announced the acquisition of Oculus VR and included the handsets produced by the company to its bug bounty program.

White hat hackers discovered several vulnerabilities in Oculus platform since, including the ones addressed now by Facebook.

The flaws were reported in October by the security consultant Josip FranjkoviÄ‡ who analyzed the Oculus application for Windows.

“Oculus enables users to connect their Facebook accounts for a more “social” experience. This can be done using both the native Windows Oculus application and using browsers.” wrote FranjkoviÄ‡. “I took a deeper look at the native Windows flow, and found a CSRF vulnerability which allowed me to connect a victim’s Facebook account to attacker’s Oculus account. Once connected, the attacker could extract the victim’s access token, and use Facebook’s GraphQL queries to take over the account.” 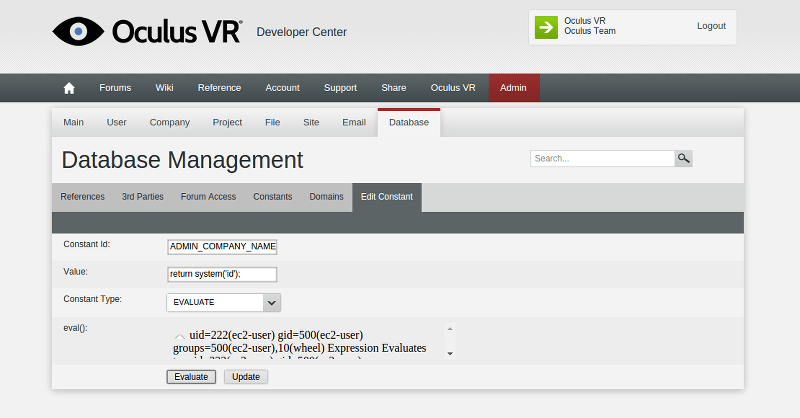 One of the featuresÂ implemented by the Oculus application is the authentication to a Facebook account,Â Franjkovic discovered that attackers could have exploited specially crafted GraphQL queries to connect any userâ€™s Facebook account to their Oculus account.

GraphQL is a query language created by Facebook in 2012 for describing the capabilities and requirements of data models for clientâ€�server applications, a GraphQL query is a string that is sent to a server to be interpreted and fulfilled, which then returns JSON back to the client.

Franjkovic discovered thatÂ a specially crafted query allowed an attacker to obtain the victimâ€™s access token and use it to impersonate the victim by accessing his account.

In a proof of concept attack,Â Franjkovic shows how to use a specially crafted query to add a new mobile phone number to the targeted account and use it to reset the victimâ€™s password.

On October 30, Facebook rolled outÂ a patch to address definitively the problem, but a few weeks later, the expert discovered a login cross-site request forgery (CSRF) flaw that could have been exploited to bypass Facebookâ€™s patch.

The experts informedÂ Facebook on November 18 that disabled again theÂ facebook_login_ssoÂ endpoint to mitigate the problem. A complete patch was rolled out after a few weeks.

Facebook paid the expert for hisÂ discoveries and classified the vulnerabilities as critical.

Step by step procedure exploited by the researcher is described on its blog, below the timeline of the hack: