ESET collected evidence of Hacking Team ‘activity post-hack, the company published an interesting analysis based on post hack samples found in the wild.

Malware researchers that analyzed the sample believe that the Hacking Team developers are continuing the development of the surveillance malware.

The Remote Control System (RCS) is a sophisticated spyware that is able to transform the device in a surveillance tool by activating the webcam and microphone, extracting information from a targeted device, and intercepting emails and instant messaging.

The company made the headlines in July 2015 when it suffered a major security breach and attackers exfiltrated 400GB of internal data, including the spyware source code.

After the hack, Hacking Team was forced to request its customers to stop all the operation and don’t use the spyware.

The experts started the investigation after researchers from the Citizen Lab provided them information that led to the discovery of a version of the RCS software signed with a previously unseen valid digital certificate.

The researchers uncovered many samples of Hacking Team spyware created after the 2015 data breach, their code implements some changes compared to variants released before the source code leak.

“The samples were compiled between September 2015 and October 2017. We have deemed these compilation dates to be authentic, based on ESET telemetry data indicating the appearance of the samples in the wild within a few days of those dates.” continues the analysis.

“Further analysis led us to conclude that all the samples can be traced back to a single group, rather than being isolated instances of diverse actors building their own versions from the leaked Hacking Team source code.”

ESET found six different certificates issued in succession, four of them were issued by Thawte to four different companies, and two were issued to the Hacking Team co-founder Valeriano Bedeschi and a guy named Raffaele Carnacina.

To avoid detection vxers behind the samples have been using VMProtect, a technique observed also in Hacking Team spyware used before the HT hack.

The researchers believe that Hacking Team developers have developed the post-leak samples and no other APT that would have borrowed their code,

“We have, however, collected further evidence that ties these post-leak samples to Hacking Team’s developers themselves.” continues ESET.

“The connections among these samples alone could have originated with virtually any group re-purposing the leaked Hacking Team source code or installer – as was the case with Callisto Group in early 2016. We have, however, collected further evidence that ties these post-leak samples to Hacking Team’s developers themselves.”

The samples analyzed continues the versioning progression used in pre-leak samples, experts also noticed that the same names (Scout and Soldier) in the samples that were also present in past codes.

In the following table, there is the timeline associated with Hacking Team Windows spyware samples. The red item is the code reuse attributed to the Callisto APT Group. 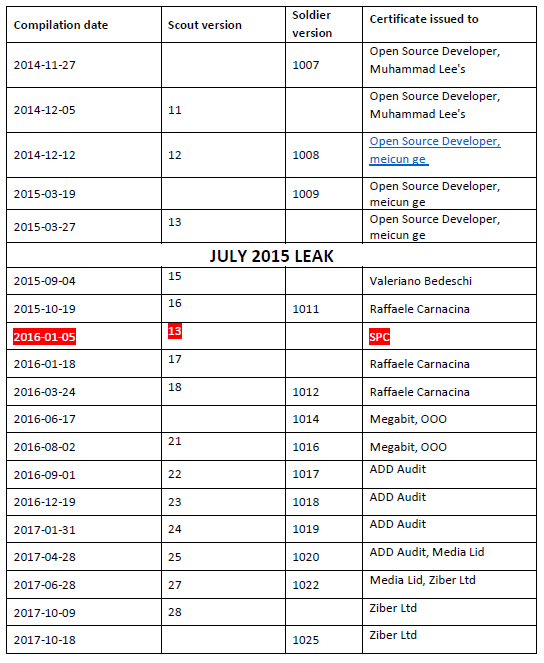 The experts found further differences that led them to attribute the new sample to the original HT development team, but they avoided to disclose them to continue to track the group.

The post-leak samples analyzed by the researchers, at least in two cases, were delivered in spear phishing message with an executable file disguised as a PDF document.

“Furthermore, our research has confirmed that the changes introduced in the post-leak updates were made in line with Hacking Team’s own coding style and are often found in places indicating a deep familiarity with the code.” concludes ESET.

“It is highly improbable that some other actor – that is, other than the original Hacking Team developer(s) – would make changes in exactly these places when creating new versions from the leaked Hacking Team source code.”

The post Hacking Team is back … probably it never stopped its activity. Watch Out! appeared first on Security Affairs.