Researchers shared details of a code injection vulnerability they found in the in the Signal app for both Windows and Linux systems. The flaw was promptly fixed by Signal.

Signal has fixed a code injection vulnerability in the app for both Windows and Linux systems that was reported by a team of Argentinian experts.

A remote attacker could have exploited the flaw to inject a malicious code inside the Signal desktop app running on the recipients’ system without requiring any user interaction, just by sending the victims a specially crafted link.

The discovery of the flaw was casual, the white-hat hackers Iván Ariel Barrera Oro, Alfredo Ortega and Juliano Rizzo were chatting on Signal messenger when one of them shared a link of an XSS vulnerable Argentinian government website.

The experts noticed that the XSS payload was executed on the recipients’ Signal desktop app.

“we were chatting as usual and suddenly Alfredo shows us an XSS in an Argentinian government site (don’t worry, it’s been reported). He was using the Signal add-on for Chrome. Javier and I were using the desktop version, based on the insecure electron framework. As I was reading, something caught my attention: an icon was showing next to the URL, as a “picture not found” icon.” reads a blog post published by the experts. 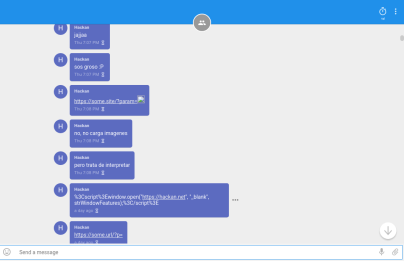 “I jumped from my chair and warned: “your XSS is triggered in signal-desktop!!”.” 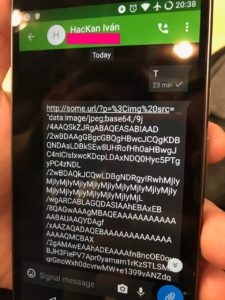 The researchers focused their attention on XSS flaws in the Signal Messaging App and conducted other tests discovering that the vulnerabilities was affecting the function responsible for handling shared links.

The experts discovered that it is possible to exploit the flaw to inject user-defined HTML/JavaScript code via iFrame, image, video and audio tags.

“We tried different kinds of HTML elements: img, form, script, object, frame, framset, iframe, sound, video (this last two where funny).”  continues the experts. “They all worked, except that CSP blocked the execution of scripts, which halted in some way this attack. However, to abuse this vuln, we could:

The attackers can also exploit the vulnerability to inject a form on the recipient’s chat window, tricking them to provide sensitive information via social engineering attacks.

The experts applauded the Signal security team that on Friday in under 2 hours from the report has fixed the issue.

Experts explained that the flaw did not allow attackers to execute system commands or gain sensitive information like decryption keys on the recipients’ system.

After Signal fixed the issue, the researcher analyzed the file’s history and discovered the patch leverages a regex function to validate URLs.
The applied “patch” already existed in the application, but was probably accidentally removed in a commit on April 10th to fix an issue with linking.
The experts are concerned about that regex and they are afraid someone might exploit it.

The Signal app continues to be the most secure choice for encrypted communication.