Unfortunately, the side effectÂ was that the long tweet caused problems, with some users complaining of crashes.

The social media giant banned the accounts of the two usersÂ for a brief period of time but are now back online after they apologized. Twitter removed the original oversize-Tweet composed of 30,396 that can be viewed here. 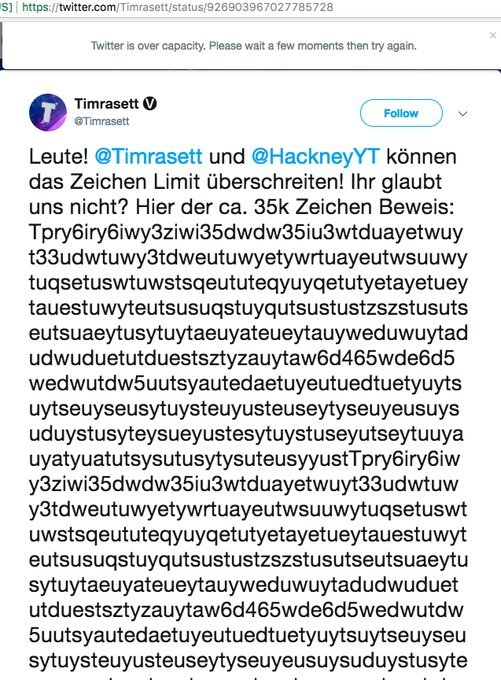 According to theÂ The Daily Dot, the GermanÂ duo exploited a rule Twitter made in 2016 that links would no longer count in the 140-character limit.

“So how did they do it? By exploiting a rule Twitter made in 2016 that links would no longer count in the 140-character limit. Yes, this is just one big web address with a URL code hidden deep in the large block of text. You can find it by opening up the tweet and searching for â€œ.cc/â€�Â reports The Daily Dot.

The experts broke the limitation by formatting a message as a URL with extensive gibberish. Twitter promptly removed it the message and suspended the accounts of the users.

The accounts of the two users are back online after apologizing for crashing the site.

Both users will continue to look for other bugs on the social platform.

Below the comment of a Twitter spokesperson who confirmed that the flaw exploited by the German duo has been fixed and pointed to itsÂ rules, specifically:

To promote a stable and secure environment on Twitter, you may not do, or attempt to do, any of the following while accessing or using Twitter: