“We recently became aware of a data security issue involving customer payment card data at certain Saks Fifth Avenue, Saks OFF 5TH, and Lord & Taylor stores in North America. We identified the issue, took steps to contain it, and believe it no longer poses a risk to customers shopping at our stores.” reads the official statement issued by Lord & Taylor.

“While the investigation is ongoing, there is no indication that this affects our e-commerce or other digital platforms,”

The hackers did not compromise the HBC’s e-commerce or other digital platforms, the company promptly informed authorities and hired security investigators to

“We are working rapidly with leading data security investigators to get our customers the information they need, and our investigation is ongoing. We also are coordinating with law enforcement authorities and the payment card companies,” continues the announcement.

The HBC issued the following statement:

“HBC has identified the issue, and has taken steps to contain it,” the company said in a statement. “Once the Company has more clarity around the facts, it will notify customers quickly and will offer those impacted free identity protection services, including credit and web monitoring. HBC encourages customers to review their account statements and contact their card issuers immediately if they identify activity or transactions they do not recognize.”

The data breach was first reported by threat intelligence firm Gemini Advisory, which noticed the offer for sale of over five million stolen credit and debit cards on a cybercrime marketplace called JokerStash. 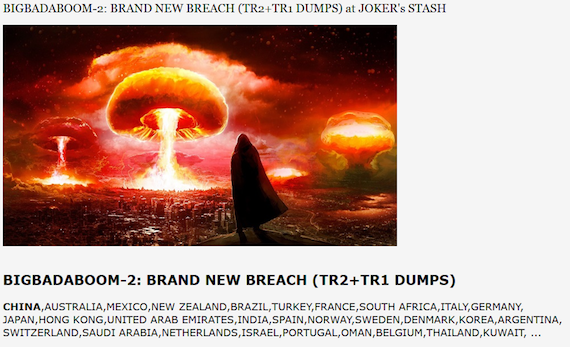 The researchers linked the security breach to the financially-motivated FIN7 APT group also known as Carbanak or Anunak.

The group continuously changed attack techniques and implemented new malware obfuscation methods. The FIN7 group has been active since late 2015, it was highly active since the beginning of 2017.

Fin7 was spotted early 2017 when it targeted personnel involved with the United States Securities and Exchange Commission (SEC) filings at various organizations with a new PowerShell backdoor dubbed POWERSOURCE.

“On March 28, 2018, a notorious hacking JokerStash syndicate, also known as Fin7 announced the latest breach of yet another major corporation, with more than five million stolen payment cards offered for sale on the dark web. Several large financial institutions have confirmed that all tested records had been used before at Saks Fifth Avenue, Saks Fifth Avenue OFF 5TH, a discounted offset brand of luxury Saks Fifth Avenue stores, as well as Lord & Taylor stores.” the company said in a post.

As of Sunday, only a small portion of compromised records have been offered for sale, crooks offered roughly 35,000 records for Saks Fifth Avenue and 90,000 records for Lord & Taylor.

“As of this writing, approximately 125,000 records have been released for sale, although we expect the entire cache to become available in the following months.” added Gemini.

At the time of writing HBC did not provide details on the extent of the security breach, it is still unclear how the hackers have stolen payment card data, experts believe hackers may have compromised point-of-sale systems.

“Based on the analysis of records that are currently available, it appears that all Lord & Taylor and 83 US based Saks Fifth Avenue locations have been compromised. In addition, we identified three potentially compromised stores located in Ontario, Canada. However, the majority of stolen credit cards were obtained from New York and New Jersey locations.” concluded Gemini.