Orbitz, the travel website owned by Expedia announced on Tuesday that it has suffered a security breach that affected hundreds of thousands of users.

Orbitz.com has millions of users, it was acquired by Expedia in 2015 for $1.6 billion.

Orbitz confirmed that attackers gained access to a legacy platform between October 1 and December 22, 2017, and stole personal and financial data belonging to consumers and business partners.

There is no evidence that the current Orbitz.com website is affected, passport and travel itinerary information were not exposed in the incident.

The company discovered the breach on March 1 following an internal investigation, Orbitz hired security experts to investigate the issue and identify the flaws exploited by hackers.

The company also notified the incident to the law enforcement that is investigating the case too.

According to the investigators, the hackers may have accessed personal information of customers that made certain purchases between January 1 and June 22, 2016. 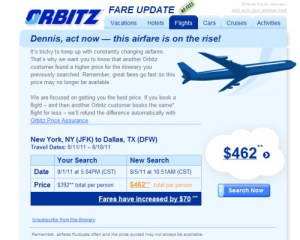 Attackers may have obtained information on Orbitz partners who made purchases between January 1, 2016, and December 22, 2017.

“We are working quickly to notify impacted customers and partners. We are offering affected individuals one year of complimentary credit monitoring and identity protection service in countries where available. Additionally, we are providing partners with complimentary customer notice support for partners to inform their customers, if necessary,” reads the statement issued by the company.

“Anyone who is notified is encouraged to carefully review and monitor their payment card account statements and contact their financial institution or call the number on the back of their card if they suspect that their payment card may have been misused,”

This is the last incident in order of time that affected the travel sector, other companies that suffered security breaches are the hotel chain InterContinental Hotels Group Plc and Hyatt Hotels Corp in 2017.