The Dutch National Police shut down the anonymous revenge-porn sharing site Anon-IB, an aggregator website for revenge and child pornography.

The men are aged 28 to 35 and live in the Netherlands, in the cities of Heerlen, Culemborg, and Groningen.

Anon-IB has first appeared in the criminal underground in 2014, it had more than 2,000 registered users and hosted links to tens of thousands of images and videos.

The operation lasted at least one year, the investigation started with a complaint by a woman in March 2017.

Unfortunately, the number of the victims is high, the police had found “enormous amounts of women’s personal data and images” on the smartphones and computers of the suspects. The police also seized data from two other suspects that have not yet been arrested, a 19-year-old from Terneuzen, and a 26-year-old from Geleen.

“With the confiscation of a server, the police have taken a hackers forum offline,” reads a statement shared by the police.

The crooks targeted the women searching for nude pictures and video on their cloud storage and shared them on the Anon-IB site and on hidden forums on the web.

[Crooks were interested] “in nude photographs and videos of girls and young women, which they stole from the clouds of their victims and shared with one another in other, more hidden locations on the internet,” continues the statement.

They obtained “sexual images of a few hundred women without the victims noticing,”

Those arrested are aged 28 to 35 and come from the Dutch cities of Heerlen, Culemborg, and Groningen.

The hackers exploited the lack of proper security hygiene of the victims to access their email accounts, social media accounts, and cloud storages.

“The suspects were able to access the e-mail accounts, social media profiles and cloud storage services of many hundreds of women. The suspects met these women on the street, tried to get their name out and then hack them, the police told RTL Nieuws.” reported the RTL Nieuws.

According to the Dutch police, suspects had all been “able to access email boxes, social media accounts, and repositories, such as clouds, belonging to hundreds of women” which had not been properly protected by the victims.

According to the law enforcement, the suspects were all Anon-IB users, in some cases, they “asked for help in obtaining images of specific girls,” then shared them within smaller groups “in hidden places in the web to share the stolen footage.” 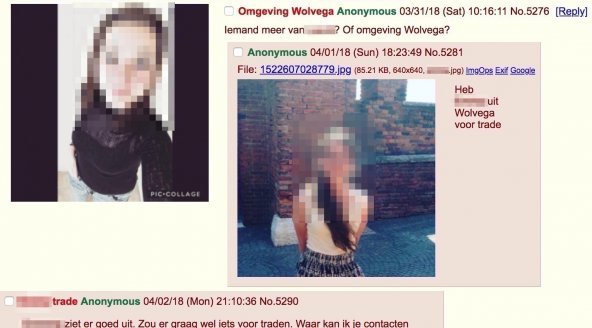 The crime “involves a lot of women who have been hacked, hundreds or even thousands,” Police spokesman Joep Patijn told the NOS broadcaster.

According to the police, women from other countries may also be involved, and authorities are working to identify the victims.