The researchers at CSE ZLab have spotted a new family of malware, tracked as Bandios malware spreading in the wild.

The peculiarity of  Bandios malware is the fact that this malware is in a rapid and constant evolution and development.

Experts observed several versions of the malware stored on the same websites, they represent the evolution of the malicious code that is continuously updated by the authors. ZLab researchers analyzed all these samples and noticed that they have the same behavior, the last compilated and thus the most recent is the sample hosted on the “/OnlineInstaller.exe” path, with the hash “3f11ea10cb7dc4ed8e22de64e9218b1c481beb8b6f4bf0c1ba6b021e9e3f6f72”

Moreover, the site “http://ozkngbvcs[.]bkt[.]gdipper[.]com/” is used as a repository for the entire colony of this malware:

The main malware sample is installable from the simple path “OnlineInstaller.exe.”

During the analysis, the researchers observed several versions of this malware published in the same path, some of them are test versions because they cannot be executed due to the presence of coding errors.

Another peculiarity of the Bandios malware is the usage of digital certificates revoked by the certification authority. 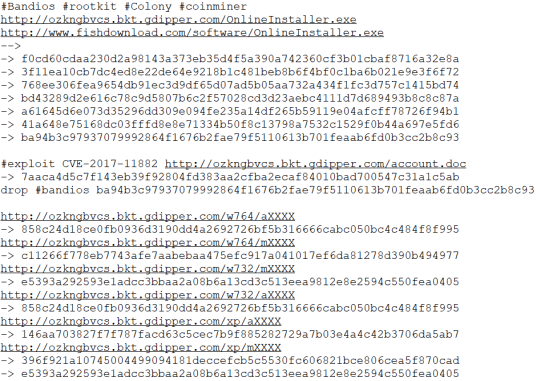 Finally, the above figure shows that we have a punctual separation and categorization of all the samples, based on Windows version (7 or XP), architecture (32 or 64 bit) or the exploit, in particular, the exploit code for the CVE-2017-1182 Microsoft Office Exploit vulnerability.

Further details on the Bandios malware suite, including IoCs and Yara Rules available in the report published by researchers at ZLAb.

You can download the full ZLAB Malware Analysis Report at the following URL: