Airbnb China announced that it will share user data belonging to Chinese users with the Government to comply with national laws and regulations.

According to an email obtained by TechNode, Airbnb hosts with a listing in China were notified by the company by email that their information could be shared with Chinese authorities without further notice starting from 30 March 2018.

“Online short-term rental services operate in a gray area in China, which has strict regulations for hospitality businesses. Guests must check in with a valid ID such as Chinese identification cards or passports and their information are recorded by hotels in a central register operated by local police bureaus.” reads a blog post published by Technode.com.

“For foreign visitors, the rules are even stricter. They need to be registered within 24 hours of arrival into China. If international visitors are not staying at a hotel or guesthouse, they must report to the police and depending on the local regulation, provide documentation such as rental contracts or property titles.” 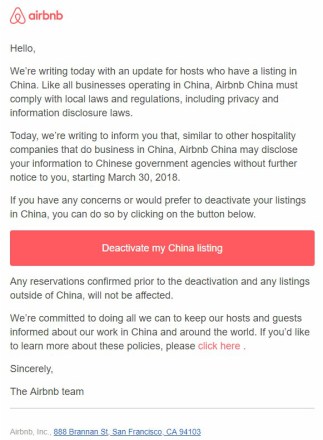 Previously, the Airbnb hosts were submitting passport and other required traveler information.

Airbnb China implemented a “deactivate my China listing” button to allow hosts to remove their listing.

National laws and regulations require the hotel and lodging industry to share data with the government. The Chinese Government aims to automate the information sharing so that traveler’s data are directly available for government agencies.

“Like all businesses operating in China, Airbnb China must comply with local laws and regulations,” said Airbnb spokesman Jake Wilczynski. “The information we collect is similar to information hotels in China have collected for decades.”