TheÂ alert was launchedÂ by AccessNow, the attack chain starts with a message from the compromised account of one of the friends of the potential victim.

“The new attack targets people using Facebook, and itÂ relies on your lack of knowledge about the platformâ€™s â€œTrusted Contactsâ€� feature. states the public security alert.

The attackerÂ asks for victim’s help recovering his account, he tells the victim that he is as one of his Trusted Contacts on Facebook, and inform him that he will receive by mail a code for recovering their account.

The attacker, who is posing as a victims’ friend thanks to the compromised account, asks the victim to share the recovery code.

Then the attacker triggers the â€œI forgot my passwordâ€� feature for the victim’sÂ Facebook accountÂ and requests a recovery code.

At this point, the code received by the victim is not the key to unlock his friend’s account, but instead, the code requested by theÂ attacker through theÂ  “Forgot my password” procedure.

If the victim shares the code with the attacker he will be able to take over theÂ your account from you.

Below the step by step procedure: 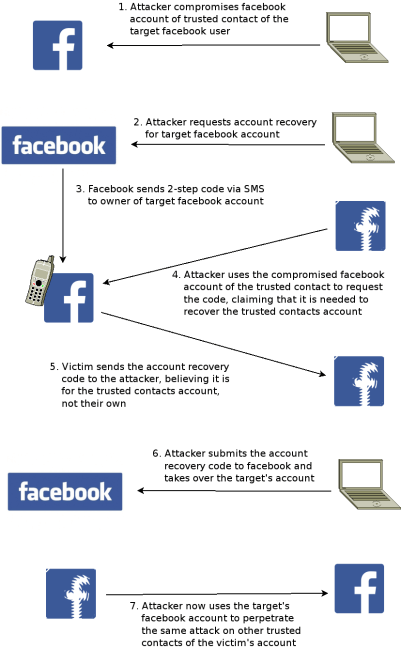 This specific Facebook scam relies on the lack of victim’s knowledge about the Trusted Contacts feature.

“The new attack targets people using Facebook, and it relies on your lack of knowledge about the platform’s Trusted Contacts feature,” states Access Now.

The Facebook scam can potentially target any users of the popular social network, but experts are seeing the majority of reports from human right defenders and activists from the Middle East and North Africa.”

“So far we’re seeing the majority of reports [falling victims to this new Facebook phishing scam] from human right defenders and activists from the Middle East and North Africa.”
We started this post explaining that the attack chain starts with a message sent by the attacker through a compromised account belonging to one of your friends.
Another scenarioÂ sees the Facebook scam initiated by your Facebook friend that intentionally trick you into handing over your Facebook account to him.
The best way to protect your account is to remain vigilant on everyÂ suspicious message including recovery emails from trusted friends.